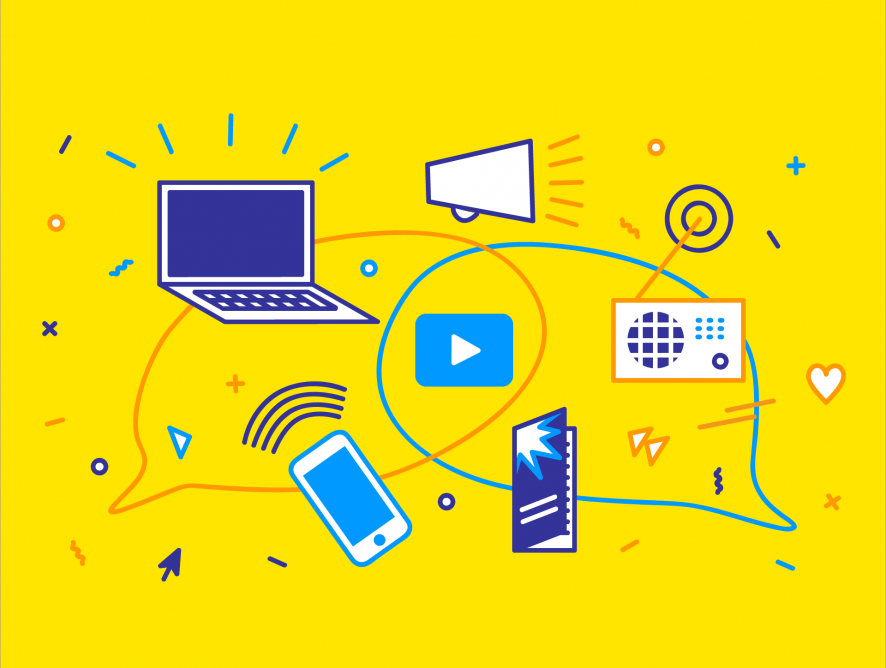 Our agency offers creation of video, audio and graphic media for digital and traditional media.

We create video and audio that revolutionize. In 2018, online video will account for 84% of all Internet traffic

100 million Internet users consume video every day. 9 out of 10 see the videos of the brands that follow and 65% of them end up visiting the web after doing so. Almost half of Internet users aged 25-54 share online videos that already account for 50% of all mobile traffic. In 2018 it will represent 84% of all Internet traffic.

2. They are easy to consume

Consuming video does not require any type of effort on the part of the user (that we recognize, it is something vague by nature). Just press play and look. Audiovisual content is infinitely more entertaining than reading a text and draws the user’s attention for much longer.

Videos are more likely to be shared than any other content. Especially those with emotional content and humor. But, eye! Never tell an agency “I want a viral”. Virals are not born, they are made.

What matters is knowing your audience enough to give you exactly what you want. And they will be the ones who decide if they share it and how much. But to start working, keep in mind one fact: 90% of the videos that are shared contain stories that appeal to emotions (whether positive or negative).

90% of online shoppers say that the video helps them in the purchase decision and 85% is willing to buy in pages where there are videos because audiovisual content makes the product more attractive and helps them understand it. In an Email Marketing strategy, the inclusion of video is almost magic: it increases the opening rate by 5.6%, the CTR by more than 96% (according to Implix), and decreases the drops by 75% (according to Forrester Marketing). In the case of landing pages, conversions increase by 80% when they include videos.

In one minute of video, the same information as in 1.8 million words. The video allows you to explain your message with many more resources and in a much more creative and emotional way. The images, sounds, editing and voiceover are much more effective in telling your story. In addition, it is proven that 80% of users remember a brand much better after having consumed videos of it.

As the videos capture the attention -increasing the time of permanence in our page- and they are shared, they benefit the natural positioning. Specifically, they are 50 times more likely to appear on the first page of Google than any other content (according to Forrester Research). A user can spend 5 minutes consuming videos on the site of a brand from his tablet (it is the device where they are most consumed) and three minutes on smartphone.

7. They begin to compete with television

Surely you’ve noticed that you yourself-or many people you know-watch TV less and less to consume series and online content. Well, this perception already has figures. 42% of online video users admit that they see less television than before.

8. They do not have to be expensive

When we talk about Video Marketing, we do not necessarily refer to large audiovisual productions. Making Video Marketing is not hanging the TV spot on YouTube or making a display with it. The audiovisual pieces must be designed specifically for digital. And while a campaign video requires a professional production to carry it out, the video content of your blog or social networks can be as homemade as your users.

From uploading a product tutorial to YouTube recorded with a mobile phone -that is, with a tripod and something funny- to small funny or explanatory audiovisual pills with any of the dozens of mobile applications (Vine, Instagram, Cameo, MixBit, etc.) very easy to use and that allow editing, putting filters and adding music and texts from your smartphone.

9. Users and social platforms have already jumped on the car

The users are already consuming video (you upload yourself to the car or not). And social platforms know this and act accordingly. After buying Vine, by the end of January, Twitter opened the possibility to record, edit and share 30-second videos from their app. Snapchat, for example, is reaping great success (with more than 100 million users) thanks, in large part, to its functionality of videos that self-destruct a few seconds after being seen. It allows even to broadcast live in a chat. Facebook, also aware of the importance of online video, has bought the startup QuickFire Networks, which compresses videos to reduce the consumption of data of its users. Online video – and consequently use it for our marketing strategies – is a revolution in progress that in 2018, according to forecasts, will represent 84% of Internet traffic . A revolution that connects you with your audience, speaking the same language as them, creating the content that interests them and in the format they like. Do you join?

Audio is of the utmost importance in our media. Sometimes we do not have a professional speaker, or with the means to produce quality audio for our promotions. We cover that need.

When do I need quality audio?

Online Stations
If you have an online station you need quality audio. It is not nice to hear an online station that only passes a music playlist without any element of identification of the station or human interaction in it. By adding audio elements such as identifiers, sweepers, intros, others, creates more dynamism in it and more retention of people listening.

Video Promotions
A video with poor audio, no matter how good it is, will look like one of poor quality. Have you tried to watch an action movie without audio? It’s not the same, is it? It also stops your promotions on videos if you do not have the right audio selection.